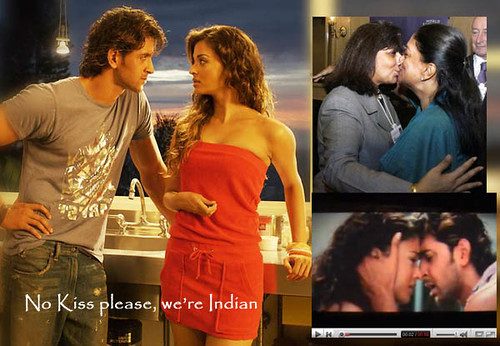 it’s quite funny that kin India kissing the one you love in public is not allowed but pissing on the streets is Definitely ok.

Two recent controversial kisses recently are choking the land of the Kama Sutra 1st A lawyer has filed a criminal case against a kiss between India’s two biggest heart-throbs — former Miss World Aishwarya Rai and Hrithik Roshan In their Bollywood blockbuster, Dhoom 2.
and 2nd is The picture of Rajasthan chief minister Vasundhara Raje greeting Biocon’s CMD Kiran Majumdar Shaw has for no reason kicked up a huge political storm, even within a section of the BJP. They’re all describing the friendly kiss between the two as obscene.

In Bollywood Kissing on screen is nothing new now, Amir Khan, Abhishek Bachan, Hrithik Roshan, and Saif Ali Khan did it before, but the leading lady of Bollywood does it then it’s obscene.
Poor Aishwarya Rai is always at the receiving end of jealous and foolish people. When she avoids scenes, she is cold, when she does it even mildly, she gets sued.
Cmon, we have to learn to live along and live with. Can’t keep stopping and fighting over such petty issues. It is a talent to be able to act and these actors have just done their job. The lawyer seriously needs to get a life.

What’s the big deal about Ms. Raje and Ms. Shaw air-kissing each other at the concluding session of the World Economic Forum in Delhi? It was just the bad camera angle that gives the impression of a kiss on the lip, in what is just a friendly embrace. But one television channel picked up the picture and went with a sensational headline ‘Maharani Ka Chumban’ flashing the photograph again and again.

“Men are uncomfortable with women in male-dominated fields. A man doing something ‘Westernized’ like a kiss would have been fine. But with women like Aishwarya Rai, everything is scrutinized,

We Indians are hypocrites, aren’t we..? We have 2nd largest population in the world, and yet a kissing scene stirs controversy…
How do we Indian make babies? By magic??
Great, ain’t it?

here is the kissing screen: Thank You