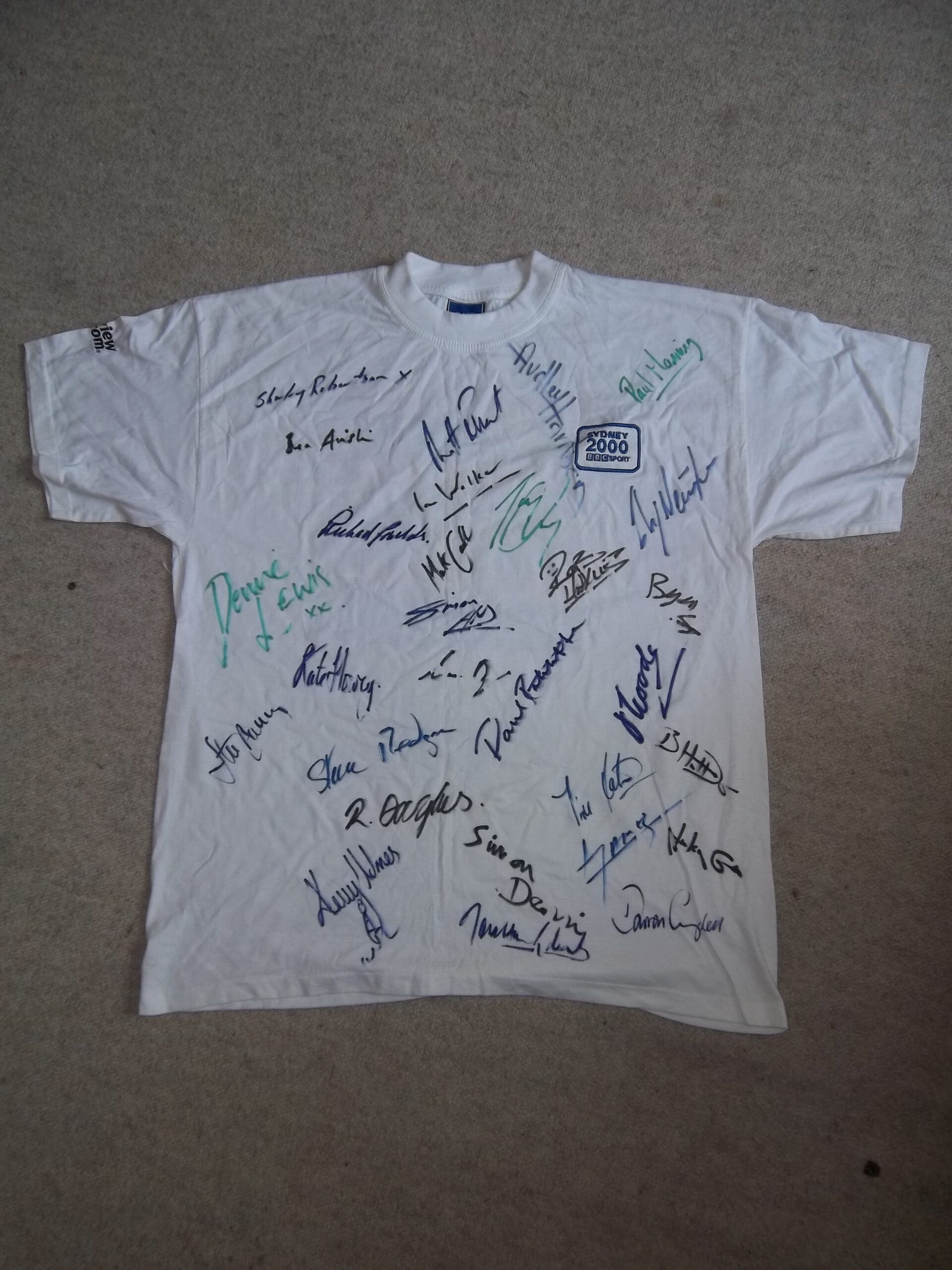 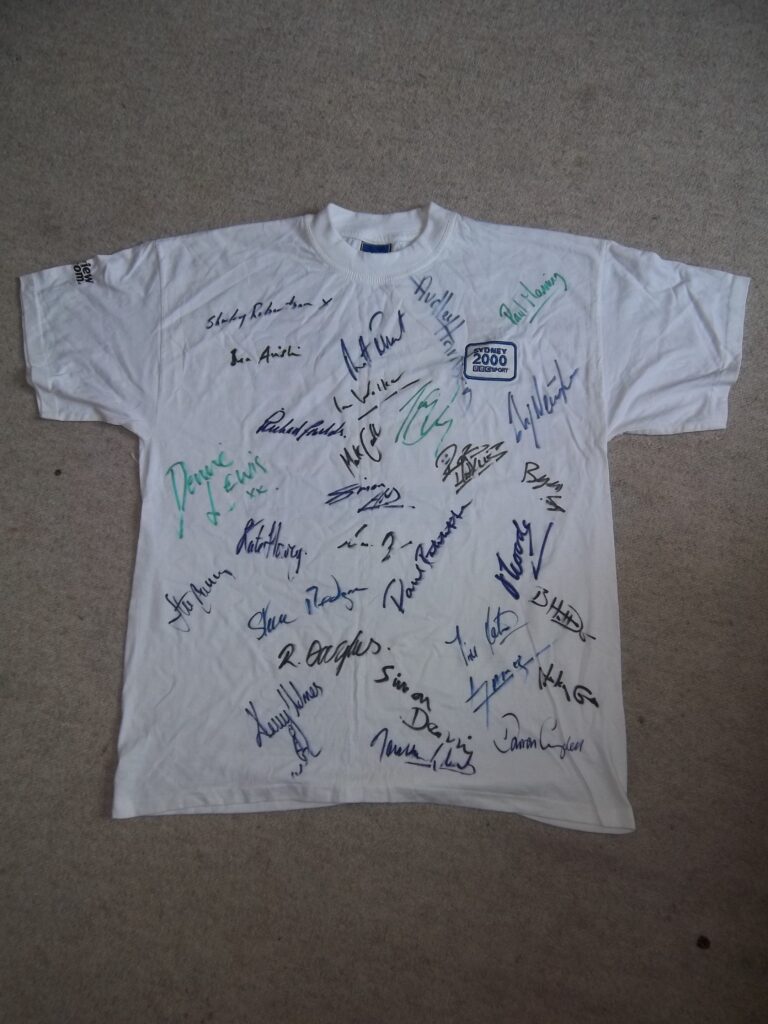 An incredible and possibly unique T-shirt from the Sydney 2000 Olympic Games went on sale on ebay today and it contains the signatures of 29 of the record breaking GB Team from that year, including no fewer than 15 Gold Medalists.The autographs include sporting legends Steve Redgrave, Kelly Holmes, Matthew Pinsent, Ben Ainslie and Jonathan Edwards

All proceeds will help another young man to try and achieve his own very unusual Olympic dream.

It is being sold by 27 year old Jay Ramirez who has lived in London for most of the past 15 years but is attempting to become the first Colombian born athlete ever to compete in the Winter Olympics.

He is back in the UK to work and fundraise so that he can return to train in Holland where the sport is very popular.

There are no long track speed skating rinks in the UK or Colombia which is why he needs to move back to Utrecht as soon as possible in order to resume training.

So far Jay has funded the venture from his own savings, by working and through the help of family and friends but now he has set up an e-bay site for this special signed t-shirt that was given to him by a friend a few years ago.

“When it was announced that London had been awarded the 2012 Olympic Games I was thrilled and excited, but also frustrated as I knew that I couldn’t take part so I decided that I would use the passion for sport that has been generated here to motivate me towards my own Olympic goal. I know that it is going to be a tough journey and that a Colombian born, British raised man who is speed skating in Holland is not the easiest of matches for a potential sponsor so I’m trying to raise the essential funding through selling pretty much everything that I have, including this incredible t-shirt !  It will be fascinating to see who may be interested in purchasing it and I hope that it finds a good home and that the buyer will know that they have also helped another aspiring athlete.”

Plus the mystery three ones ….

Born in Anserma in 1985 Jay Ramirez is a 27 year old long track speed skater who has lived in the UK for the past 15 years but who last year began training and competing in Utrecht in the Netherlands in order to pursue his dream of becoming the first Colombian born athlete ever to take part in the Winter Olympic Games.

Jay made the difficult decision to leave behind his family, friends and career so that he can devote himself to training and competing ahead of the 2014 Games in Russia having been inspired by the excitement generated by everything surrounding London 2012 and from watching the last Winter Games on television in 2010.

He first pulled on a pair of roller skates when he was just 5 years old and moved to London with his family in 1998 aged 12 and began ice skating at the Queensway club that same year. While at school he skated every day throughout his teens and his coaches included former world champion Penny Booth and former British champion Clive Shorten.

Jay took part in many local competitions, Christmas and fashion shows but the demands of his career meant he was unable to skate as often as he would like and he was advised to switch to the sport of long track speed skating as that is better suited to his physique and skills.

Because there are no long track speed skating facilities in the UK he decided to relocate to Holland so that he can train with his coach Wim Nieuwenhuizen who has trained a number of skaters to National, World and Olympic success including the double 2002 Olympic champion Jochem Uytdehaage and the double 2008 World champion Paulien van Deutekom.

Jay was one of the youngest managers in the UK for the All Saints clothing outlet in London’s prestigious Selfridges store (2005-2007) where he was also responsible for launching several additional retail sites in Harrods, Kingston and Ibiza before moving to Oxford to develop and manage the main city branch of the Office shoe brand (2007-2011).

Jay previously completed a Foundation in art and design at the prestigious Central St Martin’s and was made Head Boy at his school, St George’s in North London by Lady Stubbs when she was brought in to revive the failing establishment, as featured in the movie Ahead of the Class which stared Julie Walters.

He is very fortunate in having the backing of so many family and friends in both of the countries that he has grown up in but, having made several visits back to Colombia in recent years Jay is especially motivated by the potential opportunity to become the first Colombian born athlete ever to proudly represent his country at the Winter Olympic Games.

Jay is relishing the challenges of training as he attempts to reach that goal and, hopefully, encourage and inspire other Colombian and British youngsters to do the same in future years.